from iClipart for Iowa Schools

Wow! In just six weeks, junior highers made a huge mark! On September 13, we wrote a blog post called, “American Cancer Fundraisers.” In that post they shared their brainstormed list of ideas, which was quite ambitious.

In reality, what they did was even more ambitious! They made a lot of money, but even better, they shared their genius, persevered, fought cancer, and more than reached their goals!

In their beautiful words, I’ll let the students tell you about our successes. Click on their names to read their whole blog posts.

I’m very proud of each of them!

Eighth graders are busy planning fundraisers to benefit the American Cancer Society. Last year our junior high raised $1,020. This year students are hoping to top that! Here’s what they have planned so far.

A culmination of all of these events will be a Relay Recess late in the fall. A Relay Recess is a mini Relay for Life for schools. Students are busy preparing! On Wednesday, October 26, our school is having an American Cancer Society Relay Recess! Before the ceremony we will have education activities to teach the younger kids in our school to prevent cancer.

In honor of all the survivors we made these books. 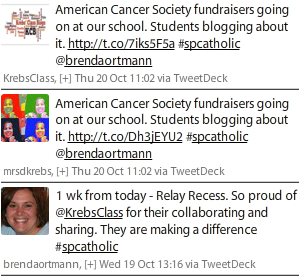 Enthusiastic junior highers at our school are changing the world and helping to find a cure for cancer. We are planning multiple fundraisers for American Cancer Society this year. Read some of the students’ reflections on their work.

My Story, poem by Shiann